The National Museum of the Philippines has many regional branches, but I’ve only been to the National Art Gallery in Manila. I first went when I was a freshman, though my memories  are now limited to the picture my block took on its front steps. Admission had been free until only recently, when they started charging entrance fees; and rightfully so, because the museum needs and deserves continuous funding for its maintenance and the restoration of the artwork it houses. October is Museums and Galleries month, so they decided to open their doors to the public for free again. I last went at the end of June, in the process of getting into character for Spoliarium, the opera by Ryan Cayabyab. Ryan and I decided to go yesterday because we had tickets for a show that night, at the same venue!

First on the agenda was Juan Luna’s Spoliarium, a 166 inches x 302.2 inches oil on canvas. No matter how I try to describe how large it is to first-timers, it never prepares them when they see it from across the room. I’ve seen this piece three times by now; and every time I saw it, I was at different points in my life, having a different perspective that helped me gain new appreciation of it. The first time I saw it, I was struck by how majestic it was, not merely because of its sheer size, but because of its dark, gruesome, ancient Roman theme. A couple of months ago, having studied the painter’s tragic life, I considered what his art had meant in that tumultuous time of the Philippine revolution, with so many of his friends and compatriots dying; and then wondering how that had affected his personal life in the following years, when he was said to have lost his mind and killed his wife and mother-in-law. Yesterday, my mind was full of the text I’d been reading about drawing, and I was taking note of his use of lines, looking closely at his strokes, thinking about where and how he had started on that gigantic canvas. My mind can’t comprehend that kind of genius just yet.

In fact, going around the galleries yesterday, even with my short and shallow exposure to the techniques of drawing, it was like I was seeing the artwork with new eyes. The collections were so extensive, I couldn’t linger on a single piece for very long; but there were some that made me stay a while longer. My favourites were Amorsolo’s “Children Playing in the River” (for its nostalgia, softness, and movement and reflection of water,) Ben Cab’s “Sabel” (for its boldness,) Joya’s “Ethereal Aura” (for its luminescence and mystery,) Manansala’s “Bayanihan” (for its texture,) one of Luna’s less popular landscapes (because of its beautiful sky, that doesn’t look as magical up close,) Ocampo’s “Mission Accomplished” (for its storytelling,) works by Nena Saguil (for their distinct character,) and artefacts from the artists, like diaries, pens, and palettes.

On a side note, in a previous visit, my friends and I had noted from several paintings that Luna didn’t do hands very well. When we saw this painting of a soldier, we couldn’t help but laugh, because he seemed to have just given up on his right hand! It’s somewhat comforting to know that even the best have their weaknesses.

We stayed until they had closed the gallery lights on us at 5:00 pm. The concert wasn’t scheduled to start until 7:30 pm, so Ryan and I decided to grab a bite at a nearby mall. Everyone we asked had said it was a walkable distance from the museum, but no one told us that there weren’t any crosswalks along the way. So, in true Manila spirit, we crossed a bridge with very low railing, jaywalked across a main road, where plenty of vehicles were speeding, followed an incorrect tip to go under a tunnel, passed many street vendors with stolen phones and accessories, but eventually arrived safely at our destination.

At the mall, inspired and feeling ambitious, I stopped by a craft store and bought drawing/writing materials. After a quick snack and three very tall glasses of iced fruit juices (we were thirstier than we anticipated,) we planned on taking a trike back to the museum. Except, the trikes outside wanted to dupe us, asking me for P100 for a trip that was less than 500m away (note: Ryan did’t even open his mouth, so he thought I wouldn’t think this were extortion?!) More confident of the way this time, we walked back with no hitches.

The Philippine Madrigal Singers has been hosting the Madz Et Al. Choral Festival for the past weeks, and last night’s show was titled, Tapestry: Philippine Folksongs in Focus. It was held at the Old Senate Session Hall, a beautiful, high ceilinged chamber on the third floor of the museum.

From my understanding, the Madz Et Al. is the fellowship of the different groups being handled by Madz alumni. The Madrigals have always been reputed to expect a high level of musicality from their members, so it’s no surprise that each one has passed on his/her musical excellence to their respective choirs. Last night was food for the soul, the kind you can only get from hearing voices in harmony. I had only heard of one choir in the line up, but the others didn’t disappoint. I was slightly confused by the repertoire, expecting purely folk songs; but unless I’m mistaken with the genres, each group sang a mixture of folk and spiritual songs. 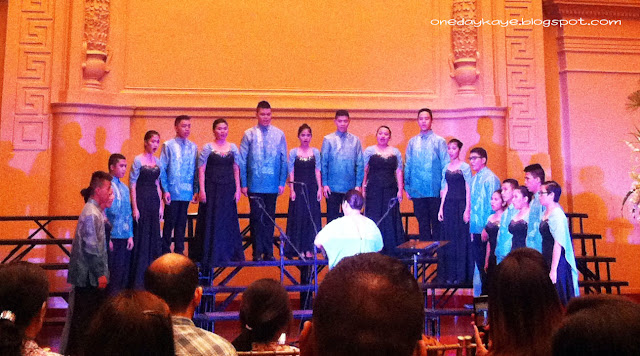 This group had clear tones, and showed lots of potential. They also had a soprano that sang her lines so effortlessly. There was a lack of confidence in their performance, which was evident in their indecisive entrances and ends of phrases. Some female voices in the middle could be more careful with their intonation (just upon observation, they can try opening their mouths a little more?) and in total, the group can improve on their English diction. The arrangement of Balot (by Bello) that they sang, while sung well, lost the playfulness that I love from the song.
Magsaysay Chorale
Jose Emmanuel Aquino (Conductor) 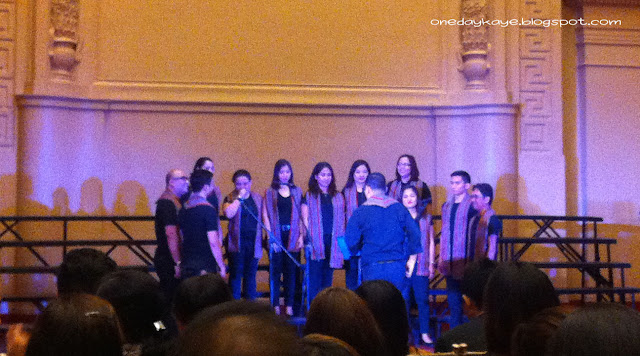 The next choir had no problems with confidence, looking comfortable on stage. Even as the men were outnumbered 4 to 7, they were not overpowered by the women; but there was something off about the overall balance that I only figured out at the end. They sang an arrangement of Bridge Over Troubled Water that I was familiar with, and  realised I couldn’t really hear their altos. The ladies could also have blended better if they had made their vocal productions more uniform. There were shaky moments in the harmony (and lyrics,) but they had moments of cohesion when they sounded their best: warm and seasoned.
Scelto Voce Chorale
Christopher Borela (Conductor) 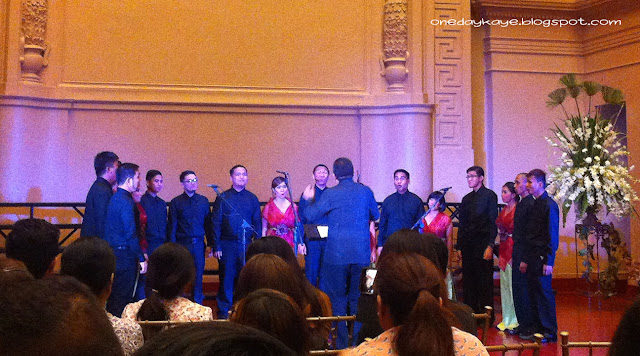 I didn’t know what to expect when I saw they only had 5 ladies in the group, but all were very strong singers. They had a good balance of voices, despite their uneven ratio. I especially loved their rendition of Caritas et Amor, it was easy to ignore the depleted breath at the very last chord. More important than the near perfection of their performance was their giving the already beautiful arrangement justice by knowing when to be intensely still, to allow soaring in the parts where it was demanded. The very rhythmic Kruhay was done with precision, because when done wrong would have sounded chaotic, but done just right was powerful.
Technological Institute of the Philippines Choral Society
Jose Emmanuel Aquino (Conductor) 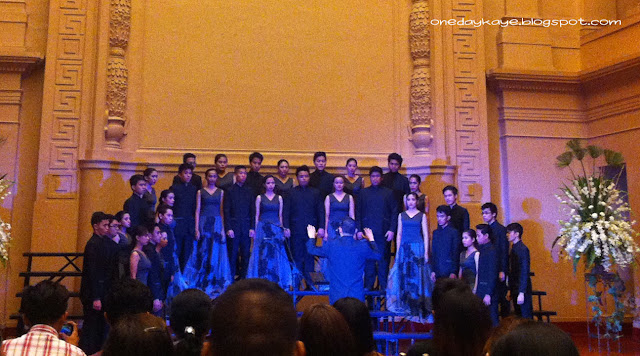 They opened their set with a strong Sanctus. Apart from their solid soprano section, I really liked how all the members sang with such enjoyment. They all wore pleasant smiles as soon as they stepped on stage. They also appeared to have a high regard for their conductor, following his instructions sensitively, effectively producing their delightful polyphony.
Ili-ili, one of my favourite and hauntingly beautiful folk songs, had an arrangement that was unexpected, but not entirely unwelcome; only slightly disorienting with its shifts to the major keys.
Novo Concertante Manila
Arwin Tan (Conductor) 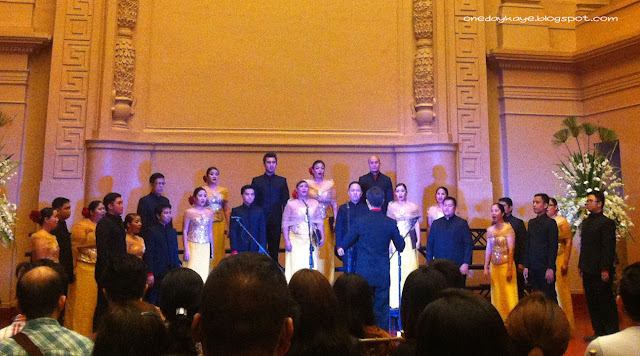 Last to perform was my friend’s choir, evidently a favorite with the audience if based on applause alone. I’ve seen them many times, and they’ve gotten consistently better each year. Their best asset is their vocal control and adherence to their conductor’s dynamics, which they all do with practiced synchrony. This was the first time I heard them sing Pagtulog Na Nene, and it was so soothing, ending with a broad climax. I’d always liked their version of Aud Lang Syne, and I imagine I’d bawl my eyes out if I heard this and I were away from my family on a cold, December evening. The soloist had a nice voice, but it unfortunately didn’t travel all the way to the back. Unlike the two other choirs that night, they did not rely on the strength of a few soloists, but stood out as a well-rehearsed chorus.

They capped the evening by calling out some of the Madrigals to perform with all 5 choirs, led by Conductor Mark Carpio. Lovely, lovely evening. It made me miss my choir days so much, I’m thinking if I should join one again!

This template supports the sidebar's widgets. Add one or use Full Width layout.